This scholarship is sponsored by InfoTrends and administered by EDSF.

About the Charlie Corr Memorial Scholarship 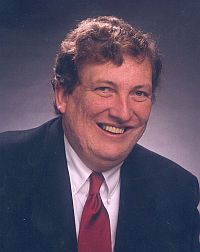 The printing industry has lost a great advocate and leader, Charlie Corr. He will be sorely missed.

At the time of his death, Charlie was the Group Director for InfoTrends Enterprise Document Strategy Services, a role he had taken on in May of 2013 after nearly six years at Mimeo.com as Vice President of Corporate Strategy.

Charlie’s long association with InfoTrends began in April of 1998 when he joined then CAP Ventures as a Senior Consultant. Charlie rose rapidly through the organization, becoming Group Director in charge of InfoTrends’ Production activities.

Charlie came to InfoTrends/CAP Ventures from Harvard University where he was the Associate Director of Operations for Harvard’s Printing & Publication Services. During his time at Harvard Charlie also taught print, paper, and related courses at Northeastern University. Charlie received a Bachelor of Arts in Political Science & Economics from University of Rhode Island in 1975 and did doctoral work at the Claremont Graduate School and University of Massachusetts, Amherst.

Charlie was a man committed to education as evidenced by his role on the EDSF Board.  His legacy will live on with the “Charlie Corr Memorial Scholarship” sponsored by InfoTrends and EDSF's Board of Directors which will be awarded in July 2014 to an outstanding full-time student committed to pursuing a career in the document management and graphic communications marketplace.

To donate to the Charlie Corr Memorial Scholarship, click here.

Charlie’s legacy is as far-reaching as the many friends and colleagues he influenced during his long career. An opinionated and thoughtful man, he was a master at supporting his contentions with research and market knowledge. Those who knew him will never forget his hearty laugh and his joie de vivre.